You Can Only Be The First At Something "Once"

HiStory. The one thing disabled sports does not have a lot of in the amputee category of sprinting is, History.
The first Paralympic Games were held in Rome, Italy, in 1960 and involved 400 athletes from 23 countries. Originally only wheelchair athletes were invited to compete. Amputees started competing in Toronto in 1976. Now today athletes from all over the world have the opportunity to take part in the Paralympic Games. I have had the good fortune and right timing to compete in the first sanctioned above knee sprinting event for a shot at the gold. Things went very well that day for me back in Seoul, Korea in 1988. But I wasn’t the first. That got me wondering. Who was the first amputee sprinter?
Who was the first amputee to first venture out to the Paralympic track and step foot on to the rubber surface and represent all of us. That is who I wanted to find out more about. When did it happen and most curious of all-what happened.
I discovered in my research that amputees have been running for recreation a long time.

The oldest picture I could find was from the 1950’s showing an above the knee and a below the knee running together. It even looks like the above the knee runner is running step over step. I have taught hundreds of amputees to run and would recognize that gait anywhere. Definitely not a hop skip running gait.
But the Paralympics weren’t a competition as of yet and it wasn’t until 1960 when they started. And in 1976 in Toronto was when the first ever amputee sprinting 100m event took place. The Men’s 100m Prosthesis D1 event was the category and it featured two competitors. They were Walter Fink of Austria and J. Little of Canada.
Walter Fink won the gold medal with a time of 42.8 seconds. J Little took second place at 69.2 seconds. The gold medal was awarded that day but no silver for the athlete in second place.

This is when things start to get interesting. The race was established and more athletes just needed to get involved. But that did not happen. Four years go by and the race actually loses its second place competitor. A 27 second defeat from four years earlier or a second place finish with no acknowledgement, J Little from Canada drops out of competition. A separate wheelchair race for amputee athletes debuts. The Men’s D1 100 meter wheelchair event had 4 athletes from three countries. Jim Martinson of the USA takes home the gold. A D1 wheelchair 400 meter race soon follows with again 4 competitors.
Walter Fink of Austria wins the gold medal in the Men’s100m Prosthesis D1 event in Arnhem, Netherlands with a time of 59.03 seconds. He also wins the gold medal in the 400m in Arnhem with a time of 5:19.9. And yes you are reading it correctly 5 minutes and 19 seconds.

And I think that is just incredible. It takes a lot of guts and spirit to be the only one out there competing and I am glad that he did. He was a pioneer of the sport. I have a lot of respect for a competitor like that. In today’s environment the event would be easily dropped and replaced by another. Or combining a class with another that makes sense to the classifiers but no sense to the athletes. I know all too well about that.
But there are no pictures. No video. We don’t even know what Walter and J. Little look like. We don’t know the amputation levels or even their ages. All we see are results from a website with letters and numbers next to their names.
But that is HiStory!

So athletes of today like Richard Browne USA the current world record holder with a time of 10.83 sec and Jonnie Peacock of Great Britain the former world record holder at 10.85 sec are running at blazing speeds and mesmerizing crowds all over the world. The bilateral below the knee competitors of today are almost completing a 400 meter event in a few seconds more time than the 1976 final winning time. The sponsorship dollars and recognition that these athletes receive today were nonexistent back in the late 1970’s. Athletes couldn’t even afford to go to the competitions let alone be paid to sprint for a living. I have always believed that some of the greatest amputee sprinters have never even stepped foot out on to the track. They didn’t have the proper support or funding to take the next steps.
But wow, the times sure have changed! Many people speak of the advancement of technology from Walter Fink’s time period compared to today as the biggest benefit to our current athletes. I very much disagree. I think the biggest change that occurred is when Recreation became a Sport. When recreation turned into a sport is when things started to really change and people took notice and took it seriously. When that happened is up for debate, but not for me.
In 1984 there were more than one round of competitions and the final round had 8 competitors with a winning time of 13.13 seconds. What a big difference from one competitor four years earlier. All the sprinting times in the final were under 14.5 seconds. There were no carbon graphite feet yet. There were no suctions sockets. Cuff straps could be found on every below knee prosthesis and second skin was coated many residual limbs.
In 1988 we saw the first below knee amputee to break the 12 second barrier in the 100 meter final in Seoul Korea. The slowest time in the final was 13.52 seconds. Quarterfinals and semifinals led up to the world record breaking performance.

Dr. Ludwig Guttmann organized the 1948 International Wheelchair Games to coincide with the 1948 London Olympics. His dream was of a worldwide sports competition for people with disabilities to be held every four years as “the equivalent of the Olympic Games”.
Twelve years later, his dream became a reality.

Posted by Unknown at 1:08 PM No comments:

After 25 years of conducting the Amputee Walking School programs, the need for it's mission grows more than ever. I have never heard more than at any other other time in the history of the program from participants expressing heartfelt thanks. The inability to afford co-pays for outpatient physical therapy has left many amputees unable to reach their full potential.That is unacceptable.
But in today's health care environment it is reality. I have never been more motivated to expand the AWS program to new territories. 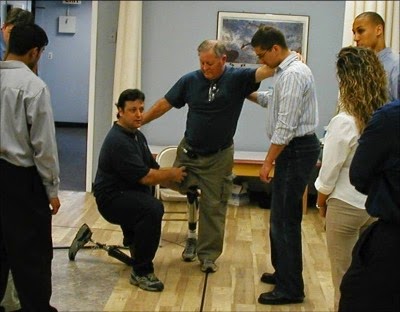 The programs frequency needs to be increased as well
to help those not learning to master the use of their device. What good is it having a incredible yet expensive prosthesis if you are unable to control it properly.
Who's fault is this? It's not the prosthetic facilities fault. It's not the physical therapists fault. It's our health care environment.
Amputees have to accept some of the responsibility of wellness to reach functional levels now that were expected before. This is hard for us as amputees to accept. It is also a built in excuse to not want to get back to living. Sometimes the light at the end of the tunnel seems to have dimmed but it hasn't, it's just changed. The traditional care: amputation>sub-acute>SNF>homecare/outpatient rehabilitation now has a final destination>Amputee Walking School.
K2 level amputees are our everyday heroes. Every year the amount of everyday heroes grows. You may call them Mr. Jones or my patient. I call them somebody's grandmother or grandfather. And our everyday heroes don't care how many paralympic gold medals I have won. Or how fast I ran on my walking prosthesis back in the late 80's. All they really want to know is am I going to be able to walk again. And how am I going to do this when I get back to my home.
Family members are caretakers. They are counselors. They are chauffeurs. And in today's health care environment they are trainers. How many times in the last 25 years I have seen the holding of a TheraBand to execute a simple exercise bring a family together at the Amputee Walking School. Family members are needed more than ever to assist our everyday heroes in daily tasks. And I cherish their help. They understand the mantra I've been saying for years "One Step Forward....Is One Step Gained".
I will, through these articles, try to share what I have seen through my eyes over the last 25 years. I have learned a lot. You can never stop learning. I have met some truly incredible people over the last 25 years. 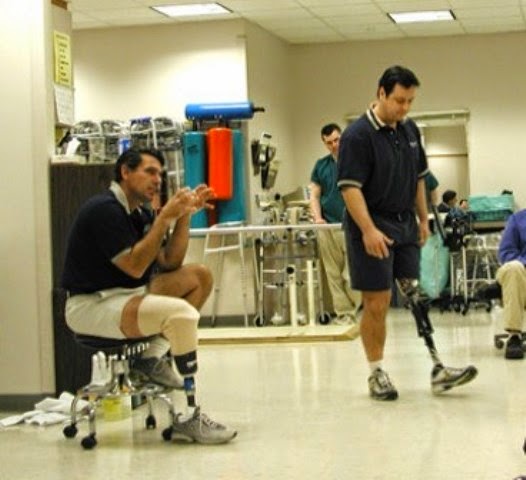 When I ask the amputees that have come to the AWS programs what is the one thing or one exercise I showed them to help
make their life a little better. They often say "HOPE".
HOPE isn't an exercise. It is the spark that lights that dimmed tunnel and says "I want my life back". I like turning on that light.
Todd Schaffhauser- AWS Networkhttp://www.amputeewalkingschool.com/
Posted by Unknown at 9:56 AM No comments: